These Aren’t Exactly the Girls You Remember
by Page Turner 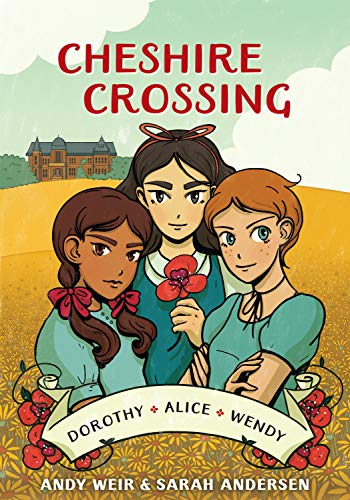 Dorothy, Alice, and Wendy have all ended up in Cheshire Crossing. Although it appears to be just another sanatorium it’s actually a boarding school where the girls will learn to control their powers. None of them are exactly content to stay locked up, though, and their dimension-hopping abilities may cause more trouble than they anticipated.

The idea of three girls with magic powers creating chaos had me hooked before I even opened this book. I was glad to learn that it lived up to expectations. Cheshire Crossing takes all of the magic from the original stories and gives them a sort of modern reality, even if it is set in the 1900s. And I know I’ve often wondered what happened to those girls when their adventures were over. Certainly, they couldn’t live with those huge secrets forever!

I really enjoyed the characterization of the girls, too. They aren’t just passive, proper girls. They’ve been to worlds where constant propriety could get them killed. Each of them had to learn to survive in these worlds and that kind of thing stuck. In the end, those skills are what help them the most, not just the powers they hold. I found that interesting – in the end, what does the most isn’t their innate powers, it’s what they had to learn because they used them. So if you’re looking for a modern fantasy retelling for older kids, I’d definitely recommend this book!

Thanks for reading! Check out my Instagram if you’d like (@page.turner.omnibus) – you’ll get to know which book’s I’ll be reviewing next!