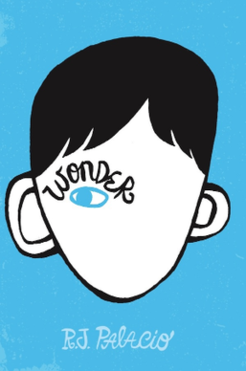 August “Auggie” Pullman is just like any kid his age. Only, the facial deformity he was born with stops everyone else from seeing him that way, and even from going to school. When he finally gets the chance to go to fifth grade at a real school, he’ll face challenges, make new friends, and maybe convince everyone around him that he’s just as ordinary as they are.

If you’ve never read Wonder, you’re seriously missing out. It’s one of those stories that really tugs at your heartstrings. I think what got to me the most was Auggie’s absolute desperation to be treated the same as any other kid. Whatever he does, he can’t help but be treated as though he is something different. Something other. It really makes the reader reflect on their own life: how often do we treat others differently because they don’t look like us? No one can control what they look like. It’s important to look past all that.

I also really enjoyed the change in point of view throughout the story. It was interesting to see what others around Auggie thought or did and if that differed from his perception of them. Showing multiple points of view is always an eye-opener, because peoples’ actions around Auggie were just as important as their actions when they weren’t with him. Readers can learn a lot about a character based upon what they do when they’re not with the main character. In the end, Wonder proves that it doesn’t matter what’s on the outside. It’s the inside that counts.