BOOK REVIEW: Zoe & Zak and the Tiger Temple
by The Omnibus 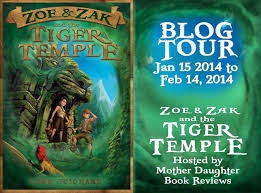 Last semester, Zoe and Zak returned the first lost Noble Truth to its rightful home. Now, Zoe and Zak are back in India for their second semester at Moonstock Himalayan Academy. School kicks off with the Activity Week Challenge in the tiny mountain kingdom of Bhutan where the students must deliver medical supplies. Things, however, take a turn for the worse, when Zak becomes deathly ill after an encounter with a strange floating bubble. On returning to Moonstock, Zoe and Zak discover that a creature has come through the lava hole far below their dormitory. When Zoe and Zak follow the creature, they soon discover what they must do. They have been tasked with finding the second lost Noble Truth — the Tiger Eye of Justice. Finding the Tiger Eye sounds like an impossible mission, and it’s only made more confusing when Zak discovers that he has been given a supernatural power to help them with their task– a power which Zak, for the life of him, just can’t control. But he’s going to have to learn how to use his new ability, because if Zoe and Zak can’t find the Tiger Eye quickly, Zak’s time will run out.

Our Thoughts: Zoe & Zak and the Tiger Temple, the third book in the Zoe & Zak series by Lars Guignard, finds Zac cursed following an encounter with a strange bubble. He and Zoe are sent on another adventure, this time by the goddess, Durga. They find themselves in a race to not only find the Second Noble Truth, known as the Tiger Eye of Justice, but to find it in time to save Zac’s life!

Additional hurdles, like new student, Vijay, as well as Virochan, from old Indian legend, immediately present challenges to our heros. Zoe and Zac and the Tiger Temple is our first read of this series; however, Guignard does a fantastic job of (re)introducing previous characters so that the reader is not left feeling like one who missed the inside joke. His description of Indian culture (and cuisine!), legend, and landscape, transport the reader directly into the world of his characters.

This was a read-a-loud book shared with our K-2nd grade children and the response was tremendous! The older kids were asking for “just one more!” chapter when we were supposed to done for the day! Although the writing is geared towards an eight+ year old reader, the adventurous tone of the book was not lost on the six and seven year old listeners! Our favorite part of the writing was that moment when you could visibly see the light bulb go on within our kids as the puzzle pieces of the mystery began to fit together. Discussion erupted spontaneously!

At the End of the Day

We loved this book as much as the kids! Not only was it a fun adventure, but it included a male and female hero who had to figure out how to work together to be effective. Zoe and Zac are honest kids who never give up in the face of adversity. What great literary role models for both boys and girls!

* We received this book free-of-charge from the publisher in exchange for our honest opinion. All opinions expressed are our own. Mother Daughter Book Reviews is also coordinating the Tiger Temple Blog Tour on behalf of the author.

Buzz About the Zoe & Zak Series

Book 1: “Awesome! ~ I am 11 and I liked the book because I love adventures. It was a different kind of adventure from what I usually read and it was funny too. ” ~ 5-Star Review from J. Olsen, Amazon

Book 1: “This was a fun read. This book was like a kid’s version of Indiana Jones. It’s also very educational as Zoe tells you real facts about what she sees and the history. I enjoyed it immensely. If you have a 10-12 year old child that loves adventure books, this is definitely a must read. ” ~ 5-Star review from Simone Lilly-Egerter, Amazon

Book 1: “I’m sure this book was written for children who are around the age of the two children in the book, 11 or so. But, this 35 year old loved this book! It had action, adventure and imagination galore! It was exactly the kind of adventure that a lot of kids that age dream of.” ~ 5-Star review from The Novice Christian, Amazon

Book 2: “I have a 10 year old son who is an avid reader!! He loves books, (but he’s picky too) he loved Harry Potter and Percy Jackson. He was so excited to read the 2nd book in this series! When I presented him the first book he was not sure he would like it but changed his mind quickly, then when I heard about the 2nd book being released he almost jumped out of his chair! (no exaggeration) He is anxiously awaiting the 3rd book! I would say that any child who enjoys fantasy/adventure books should read this series! It is a well written page turner! It’s a fun story that adults can even enjoy the storyline without getting bored! According to my son, ‘every kid should read this series’. ” ~ 5-Star review from SavyGreenSaver, Amazon

Book 2: “I loved this book, even as an adult reading it. I was completely sucked into the plot and was constantly finding myself staying up “just a little longer” to read one more chapter. Different twists and turns in the book have you constantly guessing who is behind what and who Zak and Zoe can trust. I could definitely see myself being involved in this series as a middle schooler considering how much I enjoyed it even now. Another thing I liked about it is if you missed the first book, you could still follow along with this one and not be lost.” ~ 5-Star review from Staci, Amazon

Book 2: “Lars Guignard has done a fabulous job with this series. I loved the `Ghost Leopard’ & love this one even more. For late-elementary to middle school age readers, you can’t beat this series. It’s fun and fast-paced. Even my picky fifth grader enjoyed every page. There are bits of magic thrown in keep the action exciting. Mr. Guignard has a brilliant imagination & readers are blessed that he’s chosen to use it for YA fiction. If you’ve yet to read the first installment in this series, do yourself a favor and read these books back to back. Don’t limit it just to kids! Adults will have a blast reading these too!” ~ 5-Star review from Liz Terek, Amazon

About The Author: Lars Guignard

Prior to writing novels, Lars Guignard wrote for film and television. As a teenager he attended boarding school in the Indian Himalayas and his experiences there provided the inspiration for the Zoe and Zak series which now include: Zoe & Zak and the Ghost Leopard, Zoe & Zak and the Yogi’s Curse, and Zoe & Zak and the Tiger Temple.

He lives in the Pacific Northwest where he dodges bears and cougars while hiking & skiing the magnificent Coast Mountain Range.

For news about new releases, please join his email list by contacting the author: Zoe&[email protected]

4 responses to “BOOK REVIEW: Zoe & Zak and the Tiger Temple”