Lance oversees the day-to-day operations of the World of Little League: Peter J. McGovern Museum and Official Store, a 22,000-square foot museum newly renovated and dedicated to preserving the history of the world’s largest organized youth sports program, and to providing a key educational asset to the children and families of Central Pennsylvania and visitors from around the world.

He directed every detail of the $4.4 million project, from architectural and construction aspects to selection of graphics and artifact mounting. For more than a year, he collaborated with Cambridge Seven Associates of Cambridge, Mass.,architect and designer of the new museum, as well as the media provider, Cortina Productions, and the exhibit fabricator, D&P Inc., to create the world-class museum. The World of Little League museum project remained on schedule and under budget.

As its Executive Director, he leads Little League’s efforts to publicize the new museum through traditional and new media. In his previous role with Little League International, he led the communications efforts, and was responsible for a staff of professionals who created all print, Internet, social media and video productions for Little League — emphasizing the education of millions of children in the program, as well as adults. He produced and directed a variety of short films on specific educational topics for Little League, for in-house and worldwide distribution in several languages.

One of many educational projects Lance spearheaded included a publication for volunteers and a parents on identifying potential child sex offenders. He worked closely with the FBI and the National Center for Missing and Exploited Children in producing frank information on how to protect children from this type of abuse.

He also served as the chief spokesperson for Little League for more than 15 years. His guest appearances include stints on The Today Show, CNN, Outside the Lines, BBC, Al Jazeera, Nightline, PBS, MSNBC and other outlets. He has been quoted in hundreds of newspapers and magazines worldwide.

From 2001 through 2008, Lance was the liaison for Little League International to The White House and President George W. Bush’s Tee Ball on the South Lawn initiative. During that time, 20 Little League Tee Ball games were played at the White House under his direction, with President Bush attending each game.

He served for 17 years on the Little League Rules Committee, and is the author of all rules enacted in Little League since 1996, including a 13-page rule regarding the first use of video replay at any level of baseball. This rule has been employed successfully at the Little League Baseball World Series for four years.

He led Little League’s involvement in the production of “Mickey,” a film by author John Grisham, directed by Hugh Wilson.

Lance co-authored (with Robin Van Auken) “Play Ball – The Story of Little League Baseball,” chronicling the history of Little League, first published by Penn State University Press in 2001. The book was re-released in 2004 as a companion to the PBS documentary, “Small Ball,” which 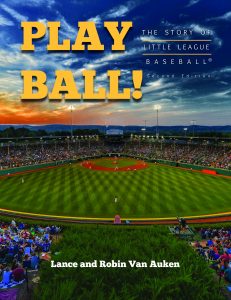