A Fencing Rivalry
by Page Turner 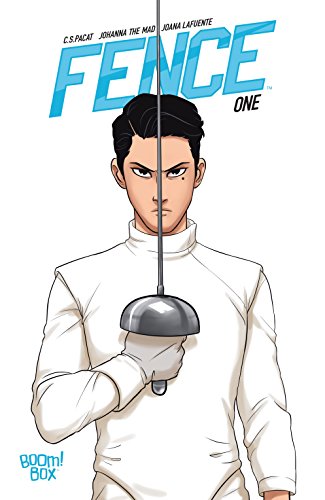 Nicholas Cox has been training in épée fencing to score a scholarship to Kings Row private school. When he gets there, he finds that his roommate was the exact same boy who beat him in a tournament. Seiji Katayama is unbeatable. The two must compete against each other and the other boys to earn a spot on the Kings Row fencing team. It holds an extra weight for Nicholas, since he’s on scholarship.

This graphic novel was one of my favorites immediately upon opening it. The artwork and narrative are amazingly detailed and will draw readers in. Seiji and Nicholas’ dynamic is irresistible to anyone who – like me – is a sucker for a good rivalry. However, I will warn any prospective reader… make sure you have the sequel on hand. You’ll want to read it immediately. (I’m still waiting for mine to arrive at the library. So. Suspenseful.) Learn from my mistakes.